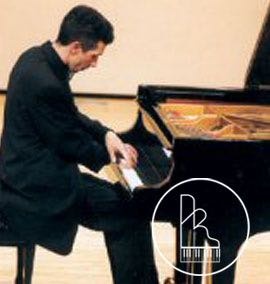 After attending Master-classes in Tours, France, taught by Maestro Evgeny Malinin and Professor Larisa Dedova, he continued his postgraduate studies in “P. I. Tchaikovsky Conservatory”, Moscow, Russia, where he graduated in the class of Maestro Malinin , who was himself a student and assistant of the great Heinrich Neuhaus.

His versatile performing career includes numerous appearances at prestigious events such as the “International Music Festival”, Zurich, Switzerland, “L.V. Beethoven” and “F. Liszt” festivals, Paris , France, to name a few, of which his performance in “Memorial for Sviatoslav Richter”, Tarusa, Russia is of most significance.

He is a co-founder of the L’estro armonico piano duo ensemble, featuring a repertoire for two pianos, as well as for piano duet - four hands, in collaboration with Dr. Marina Grozdanovic.

He was specially appointed by the Moscow conservatory to represent the Russian piano school and the conservatory itself in the “Days of Russia” tour in Japan, which included various solo recitals and Master-Classes. He is a recipient of “Musica per la Pace” award presented to him by The World organization E.I.P. “Ecole Instrument de Paix”, for representing the Russian piano school in Italy.

Currently residing in Rome, Italy, he is a founder of the “Anton Rubinstein” music school where he continues to coach young pianists through courses of specialization. As a frequent juror in many international piano competitions, he actively collaborates with various music conservatories in Europe and Russia.